A true multidisciplined effort, power to the Fraser River Parkade and International Longhouse would not be up and running without the help of:

Thanks to all the managers’ support for helping the high voltage crew get the transformer running in a timely manner. 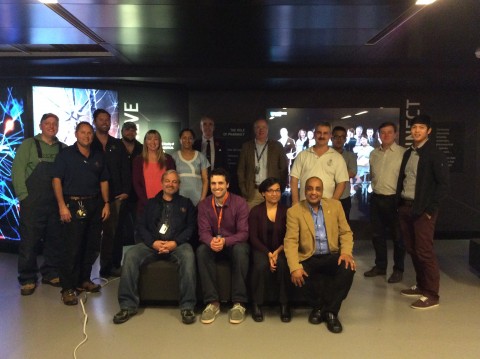 The Dean of Pharmaceutical Sciences along with the faculty’s operations team held an appreciation lunch for the teal and green zone trades and day shift custodians. The Dean spoke of his appreciation for the work the zone personnel do in keeping the building operating, which in turn supports the teaching and research housed in the building.

After meeting with key stakeholders, it was learned that the majority of your frustrations with shutdowns are related to process inefficiencies. Therefore, the next major focus is to look at these inefficiencies. Simplifying them will facilitate processing shutdowns.

Due to permit requirements, the EAOS team refocused on their initial strategy to collect BVP specific data, and the Food, Nutrition and Health building will follow. Along with asset collection, the team is moving forward with the second item from the current state analysis: roles and responsibilities. The goal is to define building systems so that there will be clarification of roles and responsibilities within Building Operations.

Do you have a co-worker deserving recognition? Nominations are now open for the 2015 Staff Excellence Awards 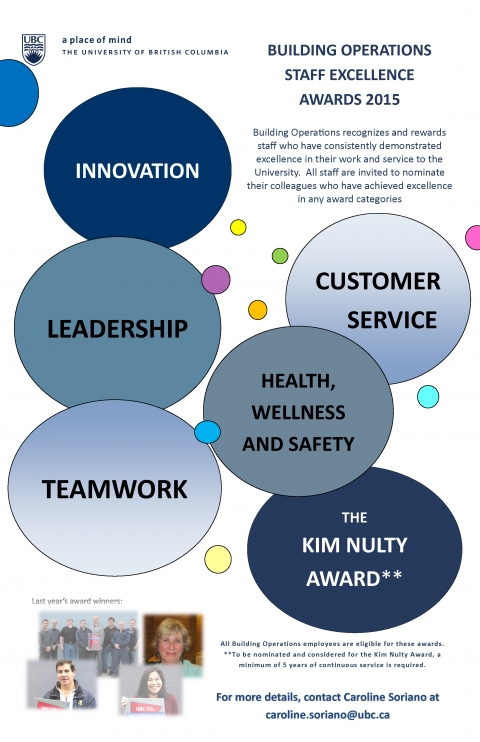 Everyone in Building Ops are invited to nominate candidates for the 2015 Staff Excellence Awards. The awards recognize staff members who demonstrate outstanding achievement and bring excellence to their work. Learn more about the categories to know which one (or more) best fits your candidate.

All Building Ops employees are eligible for these awards. However, to be considered for the Kim Nulty Award, a minimum of 5 years of continuous service is required.

Winners will be announced and awards will be presented at the Building Ops Holiday Lunch on December 16, 2015. Contact Caroline Soriano for more information.

As UBC celebrates its centennial year, United Way celebrates nearly 40 years of being the designated charity at UBC. Without the generosity of donors like those in Building Operations, it would not be possible for United Way to have the impact as it does now. A donation of just $2 per paycheque is enough to provide 1 child access to a program that teaches social skills and fosters emotional development, helping them get along better with their peers. Please consider making a payroll pledge and join a movement to create positive change in our community. Go to United Way eAccess to register.

Are you a Survivor Fan? Can you outwit, outplay, outlast and out-drink?

United Way is currently seeking 50 players that can outwit, outplay and outlast in a 12-day adventure of Wine Survivor. Instead of enduring harsh weather and scarce quantities of food, all you have to do is pledge to this year’s UBC United Way Campaign and donate a bottle of wine to the game.

The Tribe has spoken.

Thank you for making Halloween fun 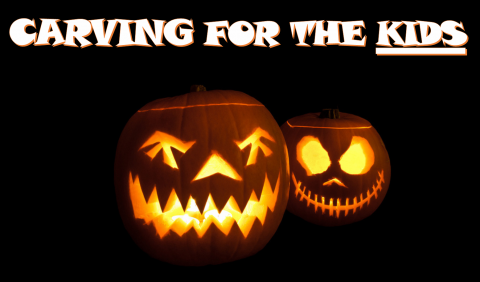 Thanks to all those who participated in this year’s Carving for the Kids. In case you missed it, the kids picked the Team Turtles pumpkin as their favourite and the adults picked the Fantastic Four.

Get Your 50/50 tickets for the November 6 draw: support United Way and win some money

Stores will be closing at 4PM this week